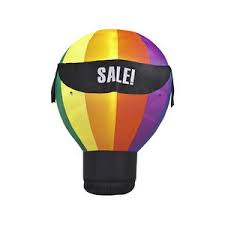 Early in 1969, one of my first contracts was with CVS stores, owned by Melville Shoe Corporation. I would fly from the local CVS store and would throw out ping pong balls numbered with discounts as I took off.

I took up Spencer Oettinger, a Board member of Melville Shoe Corporation, and convinced him he should open up all of the CVS stores in the country with CVS hot air balloons, and he agreed. We were drawing up a contract, I was checking with the factory to see if they could produce a hundred balloons, when all of a sudden we got a cease and desist order from the State of Massachusetts, where we were flying, from the State Fire Marshal.  He said the balloon fell under the state firecracker ordinance because there was a fire underneath it, and it was illegal to fly.  I pleaded with him that it was a federally licensed aircraft, and fell under the jurisdiction of the FAA. I told him that I would lose my national contract with CVS, if they did not rescind the order. So it became my first journey into politics, when bureaucrats roam free to punish the very people they are supposed to serve.

I wound up having to sue the State of Massachusetts, from which I prevailed, but lost my contract with Melville Shoe Corporation and CVS.  A heartbreaking lesson in life, but at least the skies were free to fly balloons in Massachusetts.  I went on to Liggett and Myers and sold the Lark Balloon Program.