Re: Balloon Federation of America (BFA) Statement of Non-Concurrence to the BVLOS ARC Final Report (follow-up)

The Balloon Federation of America wishes to reiterate its position regarding the change proposed to 14 CFR 91.113, in which non-ADS-B equipped manned aircraft would be required to give right of way to unmanned aircraft systems within the National Airspace System.  This recommendation, should it be codified, compromises safety on several levels, as it not only endangers lighter than air operations, but medical helicopters, agricultural aircraft and other aviation sport activities as well.  We join with our associates at other aviation organizations, such as Aircraft Owners and Pilots Association (AOPA), Experimental Aircraft Association (EAA), and Helicopter Association International (HAI), and other members of the National Aeronautical Association, in objections to this proposed rule change.

We monitored the discussion and feedback provided during the 2d sensing/listening session, recently hosted by your office.  The BFA has no objection whatsoever to the deployment and operation of smaller drones/UAS in support of emergency services, and in fact would support and encourage that service.  We do not believe that any conflict currently exists with those operations, and would state that any responsible pilot would, in all likelihood, avoid those areas of activity as a matter of course.  We would recommend, however, that consideration be given to the possibility of allowing an LEO or emergency services operator the ability to designate a temporary “TFR” around these activities whenever possible, perhaps thru the mechanism of the current Low Altitude and Notification Capability (LAANC) system, in order to insure awareness of ongoing activities.

Additionally, we are aware of the July 28th submission provided to you by the United States Hang Gliding & Paragliding Association (USHPA).  This extremely well-written response to the BVLOS ARC Final Report, while providing a detailed insight of another group’s concerns, provokes two questions:

Our concerns are directed at the larger, or “delivery” UAS vehicles being proposed by, for example, Amazon without the ability to use available technology to autonomously avoid obstacles in their path, even if those obstacles are other aircraft without the ability to electronically mark their position in the NAS.  This is especially true now that it has become apparent that these autonomous UAV (read aircraft) are of a hazardous size in the event of a collision.

To that end, one of our members recently posted a series of pictures to their Facebook account, which graphically illustrates our concerns with the delivery UAS vehicles.  That post is reproduced here, in its entirety, in order to make this a matter of public record.

If you’re a balloonist, or any kind of pilot for that matter, I’m sure you’ve seen by now the many announcements regarding the Beyond Visual Line of Sight (BVLOS) Aviation Rulemaking Committee (ARC) report. I was made aware of this report about a month ago; an individual from AOPA with whom I’d worked with on another FAA committee gave me a heads up that it was out, along with several links to the documents involved. Pat Cannon, our BFA president, got the same e-mail, so we’ve been working together on trying to come up with productive counterpoints to the ARC’s recommendations.

Simply stated, one of the primary ARC recommendations is that non-ADS-B equipped manned aircraft below 400 feet would have to yield right of way to the UAS/UAV. Period. We’ve been wrestling with the ADS-B issue in the balloon community for several months now, and I’m not sure we’re any closer to a solution that we were when we started. Suffice to say that there are some real problems with the ARC’s recommendation – combining us, as well as medical helicopter operations, other small aircraft, etc., with a drone going up to 60 knots, silently or pretty close to that, in the same airspace makes me a bit concerned. The way the rule is proposed, any and all liability for an accident would more than likely fall upon the manned aircraft for being in the drone’s way. That, to me, is simply not acceptable, and flies in the face of long-established procedures.

Last week, I took a deep dive into the specifications of one of the drones, the one Amazon has developed and apparently intends to fly. Those specifications, should you care to review them, are listed in the Federal Register for Thursday, January 27th of this year (Docket number FAA-2020-1086). The MK27-2 drone has a maximum gross takeoff weight of 90 pounds, and is approximately 78 inches in width, 65 inches in length, and 46 inches in height. Wish I could embed photos into this, but I can’t, so a picture of this device is attached. In trying to find that, I found it interesting that all available pictures of this drone have no perspective in the picture. It’s hard to imagine the size of this device, even with the measurements at hand. So…..I got creative. Using some foam core board, I built a box (not a great box, but I repair balloons, not build boxes). I was stunned at the size of this thing. Thought it was worth sharing.

The pictures attached here illustrate the MK 27-2 drone dimensions against some objects that we all have some familiarity with. Adds a lot of credence to the old saw about “a picture is worth a thousand words”. This is certainly food for thought.

I’d also add that there have been some public comments about expressing concerns at this point, and that we should wait until the NPRM is published. Having worked within this system for many years, over several projects, I would strongly disagree with that position – nothing could be further from the truth. If we wait until the NPRM, after the verbiage is written, it’s almost too late. As a community, we need to be a part of the process as this is being codified, not after the fact. 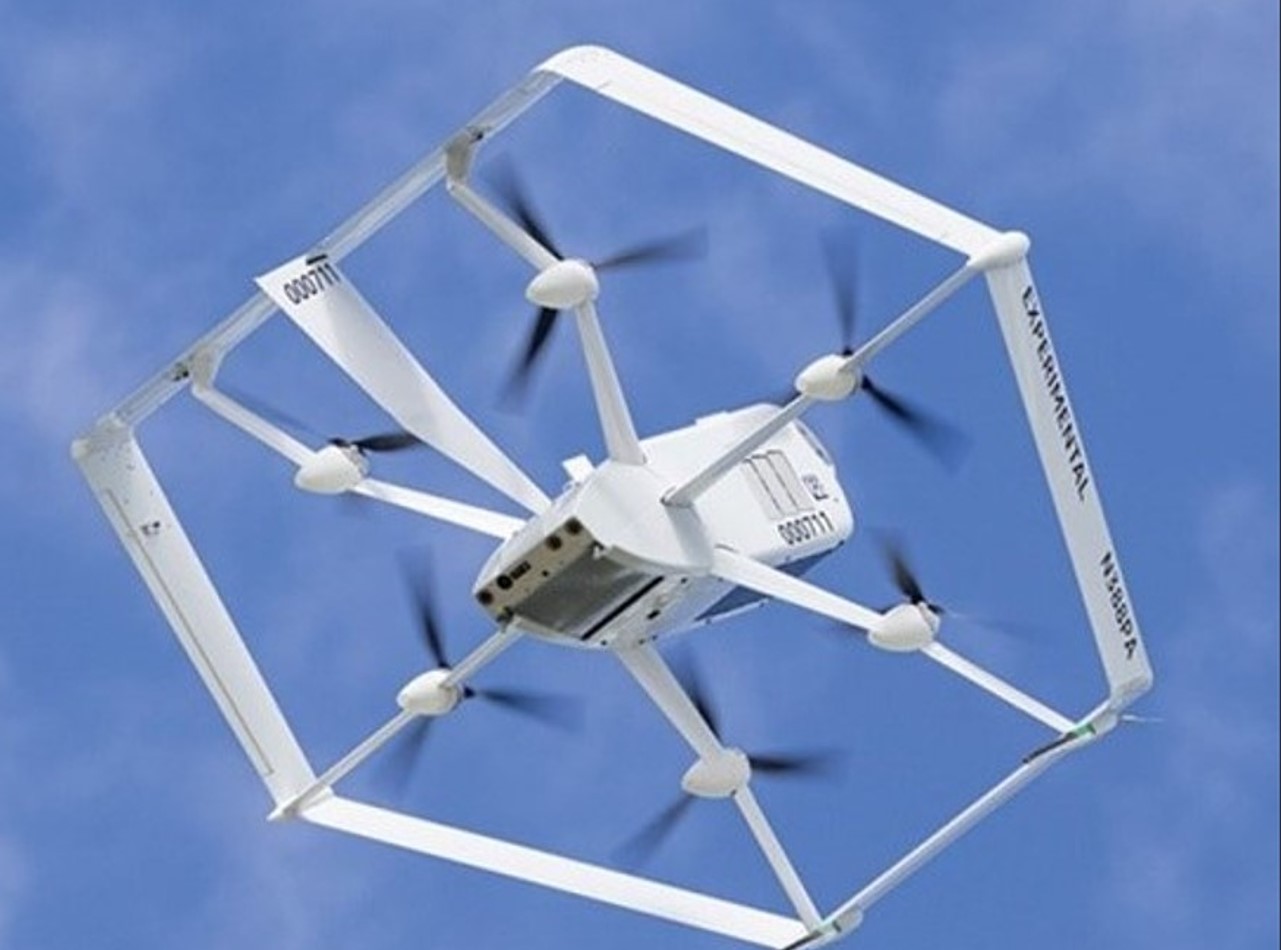 The Amazon Logistics Inc Model MK27-2 unmanned aircraft. Max weight of 89 pounds, maximum speed of 60 knots. 78 inches in width, 65 inches in length, and 46 inches in height. This picture is very common - no perspective, no way to derive scale. 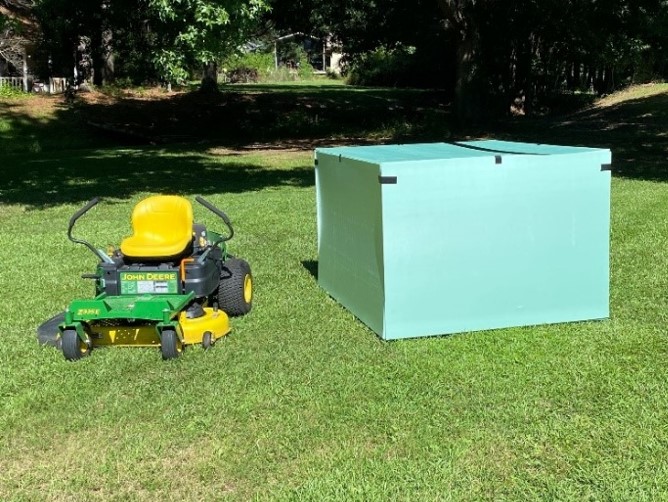 The box matches the dimensions of the MK27-2 delivery vehicle. So...everyone is pretty familiar with a riding mower. I could actually store two mowers inside the box if I had to. 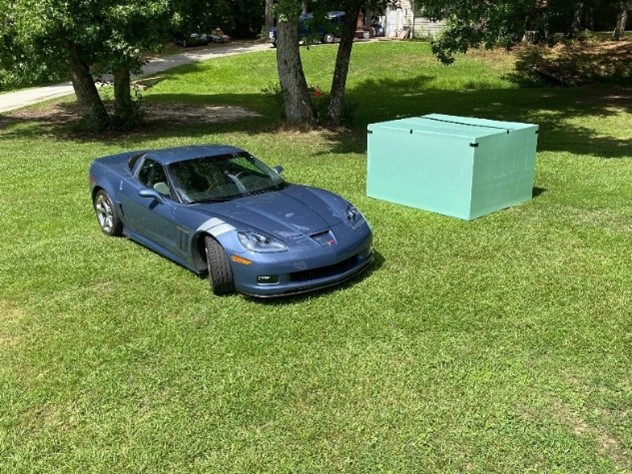 Same box, and, well, most people are familiar with the size of a Corvette. Besides, the car was out anyway. 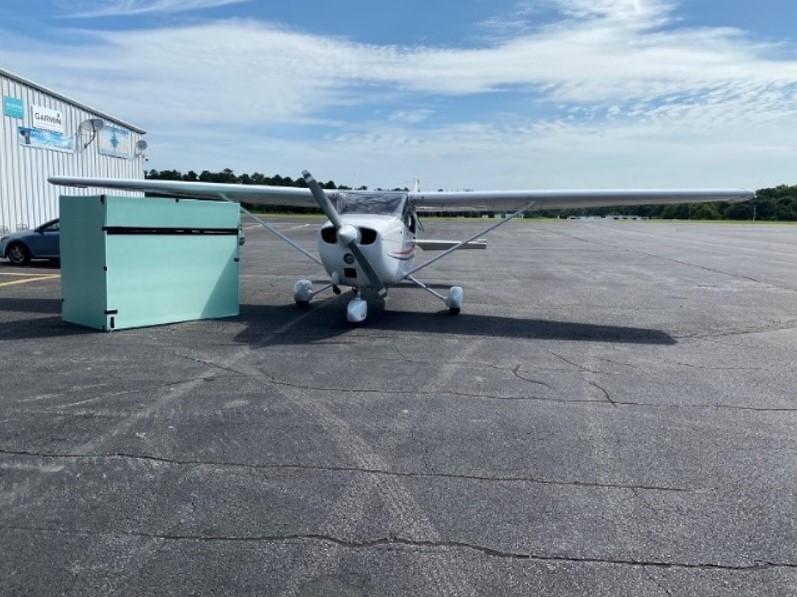 I got creative and took the box over to the local airport. With permission of the owner, we set this up. This picture is actually more valid - this would be a flight profile, so to speak, of the drone vs. the aircraft, the common, every day, Cessna 172. Very nice airplane. The box is easily as large as the passenger compartment. 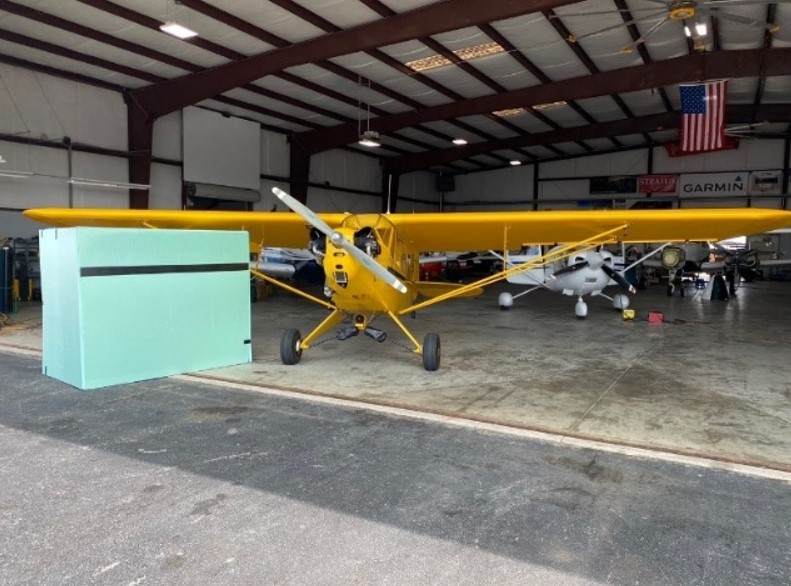 Drone vs. another non-ADS-B aircraft. Very nicely restored Piper Cub. I suspect it would not fare well in a drone impact - fabric covered and all. 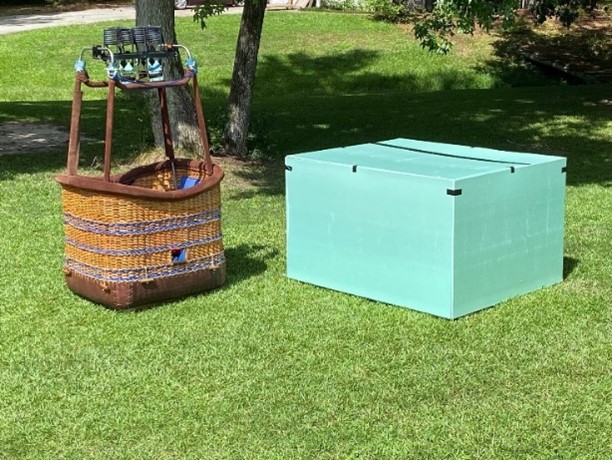 Obviously, this one is of concern to me. The box next to my smaller basket. Probably should have stood the box on its side - it would be close to the height of the uprights. I don't believe that these two items, sharing the same airspace, and with the blind drone having right of way over a manned aircraft is a good idea. Think about it.  - Dave Sullivan, BFA Member

As of this writing, this post has been viewed by well over 22,000 individuals, shared more than 150 times, and has almost 4500 engagements (comments) across several platforms.

In closing, the BFA wishes once again to state that our objection is not with the integration of UAVs into the NAS. Our objection is in the attempt to remove the long-standing rule of right of way favoring lesser maneuverable aircraft. That rule stands today both in logic and in practice and provides a safer environment for the aircraft, passengers and crewmembers that would otherwise be put in harm’s way if this rule were changed. We once again urge the operators of these large UAVs to reconsider their proposal for right of way and to quickly develop and implement the technology available to cause these larger UAVs to see and avoid without relying on other aircraft to bear that responsibility.